The conceptual spectacle GHOST started off in Ghent and is now happening in Leuven. Under the wings of RAVEYARDS (the band around Francois de Meyer and Stefan Bracke), a crowd of artists gather and leave you dancing and dazzling. On the three-legged rhythm of the social-youtube zapper by a unconventional evening. 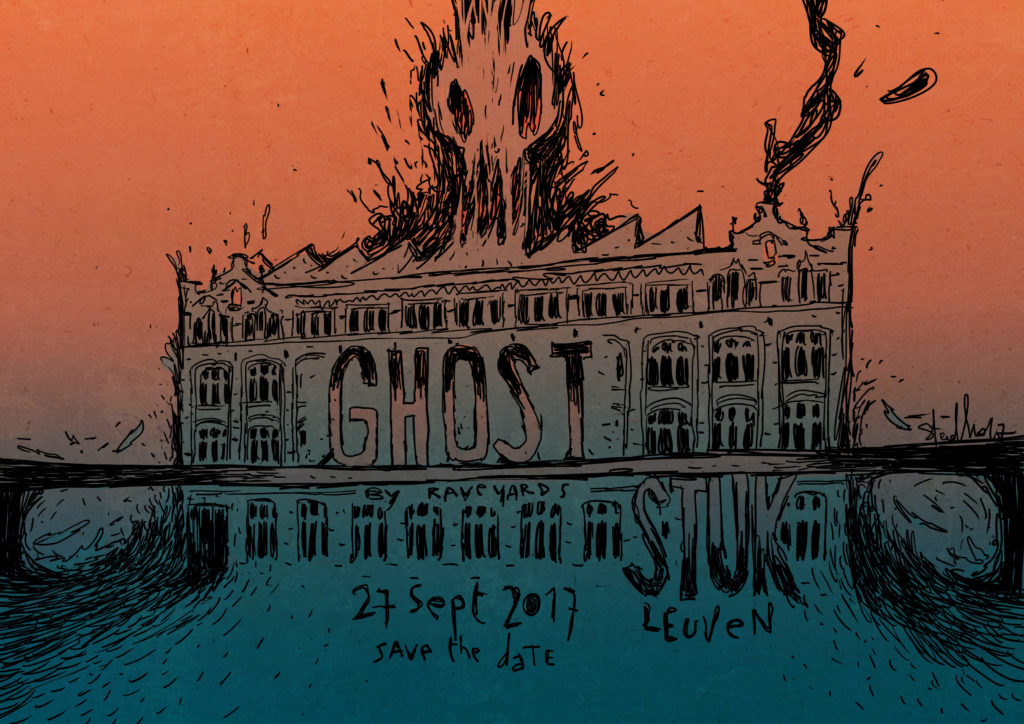 After their successful passages at the Ghent Trade Fair, Saint Jacob Church and Deep In The Woods, GHOST this time draws as a musical phantom through the building of STUK. Expect a unique guided tour, spiced with countless mini live acts, flowing into a 360° location concert of Raveyards. This nomadic music, dance, performance, party and poetry experience will send the audience to the most unmatched corners of the unforgettable concert.

This was our line up:

Laurie Hagen was born in Belgium, trained as a ballerina, once performed as a plate and a napkin in the West End musical of Beauty and the Beast and is now winning awards as a ‘burlesque firecracker’.

Trio from Ghent consisting of members of Drums Are For Parades, Maya’s Moving Castle and Wallace Vanborn that has replaced the bass guitar with droning synths, producing a sound that is at times reminiscent of a cross-over between stoner rock and the soundtrack of A Clockwork Orange.

Originally a Refused tribute act, this local band has been combining punk, black metal, math rock and post-rock since 2014.

Solo project of Steve Slingeneyer (ex-drummer for Soulwax) who was given his stage name by James Murphy of LCD Soundsystem and describes his own music as ‘Keith Moon and Animal from the Muppets double teaming Diana Ross on top of a mixer while Henry Rollins watches’.

Solo project of the Antwerp-born Han Swolfs whose past as a jazz pianist continues to shine through his heavy electronica.

Raveyards consists of members of Soapstarter, The Subs, Steak Number Eight and Brutus and loves to bring their electronica that seeks a balance between experimental triphop, industrial and stoner rock in churches and warehouses.

Current drummer of Absynthe Minded who tries to reconcile jazz and rock.

Solo project of Pieter De Wilde (drums for Raketkanon) who finds his inspiration in dark electronica and hiphop.

Ambient trance band consisting of Brent Vanneste (Steak Number Eight, Raveyards) and Björn Vanbrabant who promise ‘a trip that takes you from ambient to downtempo, from psytrance to darkpsy and pure goatrance’.

HANSE CORA
Hanse Cora is a photographer and co-founder of the Inject Love project, which uses street-art to evoke critical dialogue and inject more love into everyday life.

LEROY BROTHERS
The brothers Gregory, Gilles and Nicolas Leroy are visual artists who make art about the influence of social media and artificial intelligence in contemporary society.

NICOLE TWISTER
Nicole Twister, pseudonym of Sofie Velghe, is a video artist who is inspired by old VCR images.